A Day in Denver

Yesterday (Wednesday?), we had a whole day in Denver. Austin grabbed some breakfast burritos from a stand near our hotel and then we were off to explore LoDo (Lower Downtown) which has a nice mix of shops housed in old brick buildings that are painted with sayings like "Butter" or "Seeds." It's been eight years since I've been in Denver but up on my list was the Tattered Cover Bookstore and it did not disappoint.

After some much window shopping and exploring, we had lunch at the Wynkoop Brewing Co though they only offer tours on Saturdays. Tant pis.

We had a few errands to run and then we were off to the Denver Art Museum which had changed a lot since I was last there. Like a whole other building a lot. There was a King Tut exhibit that sounded interesting but it was later in the afternoon and the tickets were kind of pricey so we decided there was enough to do with general admission. We had a great time with the Modern Art and Photography exhibits.

After a bit of downtime in the hotel, we were off to dinner. Originally we planned on a pub crawl since we found a number of interesting places near our hotel (e.g. the Irish Snug!) but we were both tired from a day of walking and sun so we decided to just go to the Cheeky Monk. Austin loves Belgian ales and with an entire venue dedicated to them, well, it had to be done. Turns out the menu and service were fantastic, we're talking very likely one of the top ten best meals ever in LundeRoy history!

Austin got a flight of Belgian ales and a pork tenderloin in cherry sauce with some sort of cheese strata and perfectly done green beans (forgive the iPhone photos). 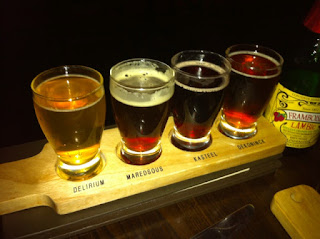 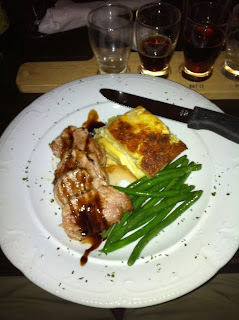 I had an amazing- best ever- pot of mussels mariniere with frites and the most amazing dipping sauce; creme fraiche and lemon juice? We were swooning in delight. Since our Denver side trip on the way to Ft. Collins was our belated honeymoon trip, this was a fantastic way to have a night out. 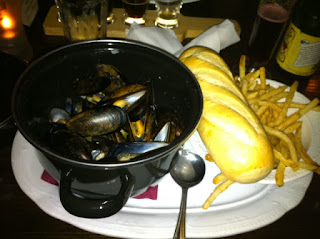