Stinky likes to hide in the house Austin made him out of a storage bin but he's not always good at hiding; he likes to stretch his paws. 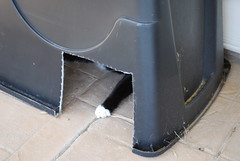 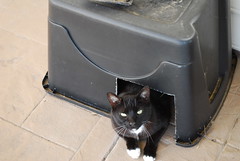 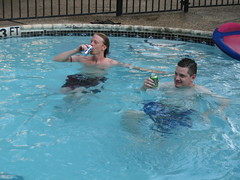 It was hot today, really hot. We drove past a digital sign that said it was 114 degrees out. The thermometer receptor had to be in the sun but still (our local news stations says the official high was 102)! Austin and I were reluctant to get in the pool but as soon as we arrived, we grabbed a drink and dove in. The water was 90 degrees. We didn't want to get out and our friends ended up ordering pizza to the pool, it was a total blast with good eats, drinks and conversation, a perfect Saturday.
Posted by Kelly at 8:43 PM No comments:

This is a shot Austin got, just click on it to see the series. 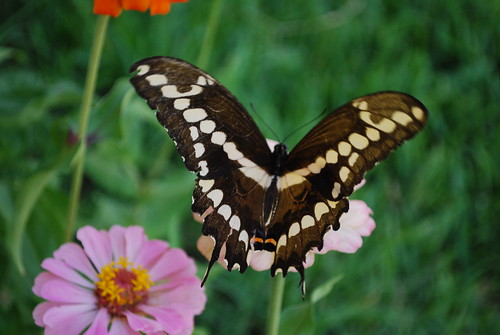 I'm off to a matinee soon at the Alamo Drafthouse and Austin's working on an art project. We're planning on having a low key night and making fish tacos with cilantro-lime cabbage slaw, sounds like good summer food, especially since we've been breaking the record highs daily here.

Tomorrow we're hoping to check out a local farmers market that features vegetables grown as part of the curriculum at a Montessori school. Saturday evening we're going to a friend's pool party and later out to dinner.

Sunday will probably be the usual errands and homework day.
Posted by Kelly at 1:20 PM No comments:

Our furry roommate (notice the lack of collar and the notches in his ears from past bad behavior). 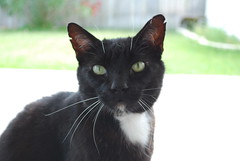 Flowers that I planted from seed. 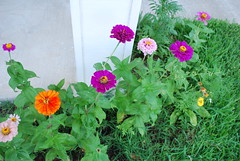 A giant, creepy bug that looks like a leaf. 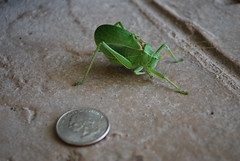 Drama in the 'hood

Austin and I were lounging this morning when, shortly before 10:00, there was a knock at the door. Not trusting anyone who knocks on Sunday morning, we ignored it (plus who wants to answer the door in pj's and with bed-head?). Later I found a message on my cell phone and it was a neighbor informing me that she had found a certain cat's collar on her front step! I knew which neighbor it was, the elderly woman who detests cats; our next door neighbor told us as much as did her husband. Nice work there, Stinkles. And she didn't just leave the collar, she is coming back this evening, so I suspect we may get a talking to about the nocturnal habits of our furry black roommate. We have shared our displeasure with Mr. Stinky but he just elegantly walked away with a flick of his tail and proceeded to lie down for a nap, tired as he was after his night out.
Posted by Kelly at 9:55 AM No comments:

It's Friday morning and I'm hacking out a draft of my final class project, a textbook proposal, due next Wednesday (well, blogging at the moment, but the Word doc is open and staring at me in the bottom of the screen). After class, my friend and I are trying happy hour at a new place (new for us) and trying one of their famous mojitos. Austin will be having his own happy hour- grilling on our back patio.

Monday will be my last day of the class I'm taking and then it will just be teaching all summer.

We haven't determined our weekend plans yet but we're going to do something fun if it kills us.
Posted by Kelly at 7:35 AM No comments:

Not much to blog about lately. Here's the routine- Austin works all day and I go to class. I come home and we talk a little, make dinner, and eat. Then Austin writes code for his personal project, (not work) and I do things like grading, lesson planning and studying. We repeat this every weekday. We don't currently have weekend plans other than some down time but I think we might try to do something fun to break up the doldrums.
Posted by Kelly at 1:20 PM 1 comment:

Austin and I went to a baseball game last night. We received free tickets, parking, and food from our real estate agent and got to hang out on the Party Porch. Austin and I both had good experiences at Saint Paul Saints games so we decided to check out the Round Rock Express (and interestingly enough, Express was the name of the Eau Claire team too). The only tiny little snag is that zOmg it was GAME SEVEN for the Stanley Cup and Austin's long time favorites, the Detroit Red Wings, were playing. Thank goddess for Tivo.

We had an arduous journey to get to the game, stuck in a traffic jam and stressing about how to graciously leave early. It has also been unseasonably hot here (10 degrees above average) and even with the a/c on, the sun beating down through the untinted car windows while we were at a dead stop wasn't pleasant. But alas, we made it and as soon as we got to the porch, it was instant fun. The stadium was huge and beautiful and we had a great view (but didn't bring the camera). The food was really good and they even had some tasty veggie burgers. We got to meet a friend's cousin who ended up referring us to our agent (we were stretching to find someone, anyone in Aus-town that could recommend a good real estate agent and we got it!) and Austin ended up talking tech stuff with the guy while I found out his wife would soon be at grad school in the Germanic studies department. We also met other nice people and discovered that our agent's son-in-law owns a roofing company.* It was really fun and the only drawback was that the scoreboard sometimes flashed the scores of other games so Austin was terrified he'd see the Wings update.

We finally decided to leave, having enjoyed the game much more than we anticipated, and headed home around 9pm. We saw the most spectacular lightning storm on the way back but it didn't rain. Then we tucked in to watch the Tivo-ed Wings game and they ultimately lost but Austin enjoyed the intensity nonetheless.

It was a great Friday evening and now we've got an unscheduled Saturday ahead of us (writing code for Austin, school work for me) except for dinner. Austin has been craving coconut shrimp like a madman lately so we're going to go out to dinner tonight in search of a fix for him.

*This is why we need a new roof. Our entire neighborhood has been getting spammed with flyers and mailings from roofers and every house seems to have a different company so we were at a loss of who to choose. Now we know!
Posted by Kelly at 9:55 AM No comments:

Back to the Grind

I haven't posted for awhile because I'm back to summer school and it's kept me busy with teaching and student-ing. I teach for four hours a couple of mornings a week and take a class Mon-Fri for three hours every afternoon. So far the teaching is going well and the class I'm taking is outstanding but the condensed summer school schedule means more homework, grading, and lesson planning and less time and material for blogging.

Austin's always busy at work, especially with a chronically understaffed office, and he goes significantly over 40 hours/week every week. He's been loving the new camera, though, and experimenting with it quite a bit so expect some cool photos coming up.
Posted by Kelly at 6:31 PM No comments:

We Got a New Camera! 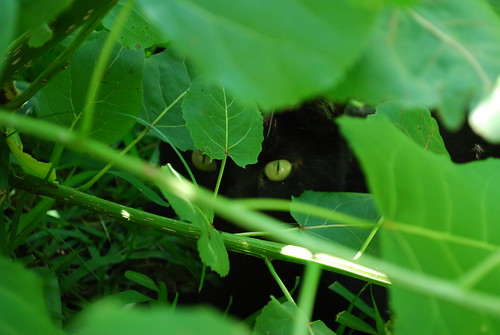