No photos to post this time, I guess we were too busy weekend-ing to think about it. On Friday, we had a quiet night and made homemade pizzas. Austin did some gaming and I did some reading.

Saturday I had an old friend in town so we planned to meet him and his girlfriend for lunch. We ended up not only doing that but spending most of the day with them. We had lunch at a local Mexican dive, then hit up the brew pub next door, went to a wacky toy store, and finally ended up at another pub so they could try some local beers (they brew their own, hence the interest). We had a really good time and Austin and I always like the excuse to play tour guide and do some things we wouldn't just do on our own.

Sunday was the usual homework/housework day. Austin and I decided to beer-batter some cheese curds and deep fry them since it was nice enough to set up the fryer outside. I julienned a few potatoes for frites and we panko-battered some onion rings. The concept was good but the wind kept the fryer from reaching a high enough temperature to successfully cook at and we didn't want to bring the thing in the house. This meant the results were not ideal and there is only so much grease and salt a person can take. We were disappointed but lesson learned- the oil has got to be more than just "almost hot enough" and it's better to feed a group. Ah well, at least the kitchen doesn't smell like a greasy spoon.

We're back into the work week and daydreaming about some possible brief excursions to do over my spring break in March. I'm trying not to overdose on WI and world politics, a challenging task. Fortunately Stinky provides the comic relief here; his new trick is sitting up on the bed, purring heartily, and watching us sleep at close range. A little creepy, a little cute, and it makes us laugh.
Posted by Kelly at 1:13 PM 1 comment: 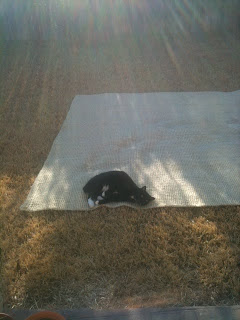 Stinky was perplexed to find the rug in the/his yard and felt the need to sniff it and roll all over it. We're just glad that we don't have to replace it.
Posted by Kelly at 4:16 PM No comments: 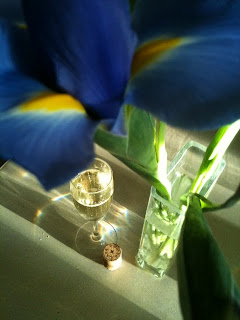 We're not big on Valentine's Day but I always like the excuse to make a nice dinner and maybe tuck into a decadent dessert. I picked up some halibut on Friday and my gift to Austin, Young's Double Chocolate Stout. We made lentil dal that night, planning on Saturday as our Vday dinner night.

As it turned out, Saturday was not to be. Austin was doing a routine toilet maintenance procedure (technical term? changing the flusher thingie?). Just as he was finishing, another part of the flushing assembly broke and multiple trips to Lowe's ensued. We finally had the halibut on Sunday (panko-herb crusted, quite nice) and then last night were having dinner and some wine when I set my glass on the coffee table and it fell onto our jute rug. At 9pm at night, we were in the back yard trying to pressure-wash the wine out of it. We also discovered that the rug has left residue on our laminate flooring and one of our hoses succumbed to the recent freezing weather. Huh.

So it was an interesting weekend and Vday but it's hard to be in a bad mood with weather forecasts stating things like "abundant sunshine" and temperatures in the 70s as far out as they dare hype. I read online that sunshine and lemon juice can remove stains from jute rugs...

Update: The rug, it seems, will pull through. It is laying in the yard and we sprayed the spot with Folex.
Posted by Kelly at 9:21 AM No comments:

On Wednesday, Austin got a random call from a friend of his dad's and before we knew it, we had dinner plans for Thursday. We chose dinner at Vespaio, an Italian restaurant friends had been swooning about. I took the bus to campus so Austin could pick me up right after I was done teaching and take me to meet the family friends.

Vespaio was very busy and we were barely able to press up against the bar to enjoy a few pre-dinner drinks as we waited. It was trying to see the menus and list of specials laying on the bar but a nice glass of Montepulciano (hers) and Anchor Steam beer (his) helped as did the engaging conversation(s) we were having over the din of the bar. Eventually, we were led to our table which was located a little off the main restaurant area in a nook surrounded by walls of wine bottles. After more menu-ogling, we were ready. 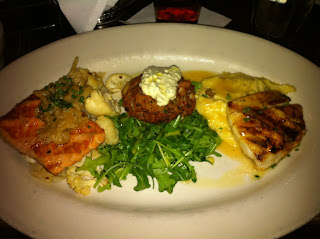 I opted for the linguine with clams. 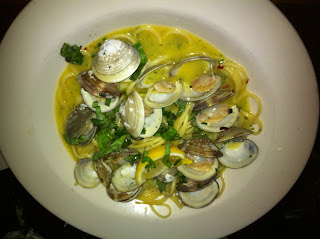 Our dinner companions had a lamb shank with saffron risotto (and I had to get my fork into that risotto- divine!) and what I can only describe as a fancy pork chop (I'm not big on meat so I lack the vocabulary to describe it but I can say it went over well with its consumer).

Over all, it was a delightful evening from the wine to the food to the charming company. We have been so lucky to have had so many interesting visitors since we moved to A-town.

PS I had to look into the meaning of the restaurant name, "Vespaio." I wondered if it had anything to do with the Vespa as quintessentially Italian. "Vespa" means "wasp" and "Vespaio" is "wasp's nest." I should have asked why it was named as such.
Posted by Kelly at 3:55 PM No comments: 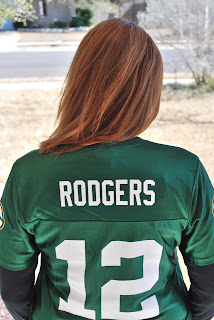 Today we've hunkered down for the big game. It's currently in the 70s so we've got all the windows open and a Packers balloon whipping around in the yard (lest our neighbors question our loyalties). We had some great sushi for lunch and will be noshing on appetizers the rest of the day. I miss our big Super Bowl parties from when we lived in WI (a tradition Austin started while in college) but we two + Stinky will still fully enjoy the occasion.
Posted by Kelly at 2:25 PM No comments: 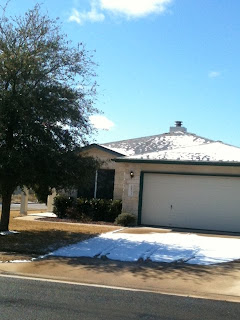 It's our annual snow day. I believe other places got more and by the time I got around to taking a picture of our house, much had melted. What appears to be tire tracks in our drive way is actually HI spelled out by the shuffling feet of some neighborhood kids.

The university is closed although I don't have classes today anyhow. Many places are shut down and the city is enjoying the excitement. I am going out with some girlfriends from grad school tonight and the restaurant where we have reservations is set to call us if they close, apparently in the event that the melted snow re-freezes.

My favorite part is stepping outside hearing the dripping and running water as everything melts. I had forgotten that spring has a distinct sound that we don't get to enjoy down here except maybe one day a year.
Posted by Kelly at 11:27 AM No comments: 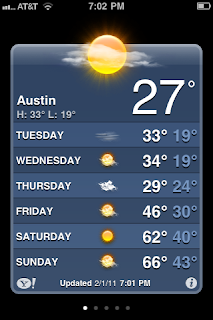 We got a lot done today and, after lots of tasks and chilly blasts, we've got the fire going and some mulled wine simmering on the stove.
Posted by Kelly at 6:02 PM No comments: