We're getting a bit more settled in and are at the end of the first full work week in our new digs. It's been really warm and Austin's office is upstairs. We have applied film to the windows that supposedly blocks up to 70% of the sun/heat and we put up thermal curtains in an effort to block even more. It's still very warm upstairs but yesterday, we had a delightfully cool day as evidenced by one of the weather apps on my phone: 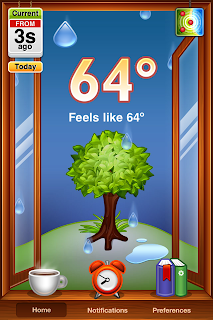 The beverage on the window sill changes depending on the weather and it was pretty much lemonade the whole time in Texas. I was delighted to see the rain and the little tea cup yesterday (and don't you dare tell me it's coffee!). We had the windows thrown open and it got rather cool in the house. Austin actually switched to jeans and sought out his moose shoes which were, alas, still packed away somewhere. I had a bit of a headache so it was a good excuse to curl up on the couch with Stinky, watch the Packers' preseason game, and play word games on my phone. It was a perfect evening.

Today, it's still cooler but not rainy. I'm on campus working on several projects that I need to get through. I'll be conducting training for the teaching assistants of all languages as well as another training session for the instructors of lower division Spanish so I have a lot of prep work to do, particularly as a new faculty member. Throughout the semester, I'll have coordinator duties related to the TAs and instructors along with teaching.

My work today will be rewarded, however, as Austin has announced a quest to research the pizza situation in town. We are in a college town in the Chicagoland area so there are numerous options and even more opinions on the pizza. Tonight we plan to go out to sample the first option, a nice end to our first work week.

Any report on the pizza search? We will need this info for our future visit