In Pursuit of Pie 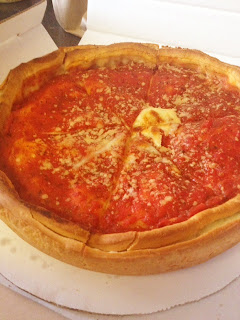 Last week, our first pizzeria was Giordano's which had some good reviews. They were carry-out only so we placed our order and hit up a wine tasting since we were not aware of this until arriving. I mean, the place does have a sign that says "restaurant" which would lead one to believe there was seating but it was not to be. We ordered a thin crust and a deep dish.

Well. The thin crust was tasty and I am of the belief that the crust is merely a delivery system for the toppings and not a big part of the show. The deep dish, then, was just too much with all the crust and what had to be pounds of cheese inside. The sauce was very tasty which is important to me, the cheese was good but... there as an issue. Austin pointed out a strange taste on the crust of both pies, like some sort of cleaning solution. As soon as the Super Taster said that, I noticed it too. It seemed as though the dough had been prepared on a freshly sterilized surface. As much as we were grateful for the efforts to combat contamination, well, it sort of ruined the experience. We may try it again later but for now, we'll try someplace else.