I can't believe it's taken me so long to update on the Lady Moon, but the start of the semester has demanded most of my attention. The cool thing is, we Lady Mooners created our own little (private) Facebook community where we are still interacting regularly, swapping everything from sage advice to fantastic recipes to wry humor. This group has been a wonderful support as I begin a new semester at a new job in a new city. 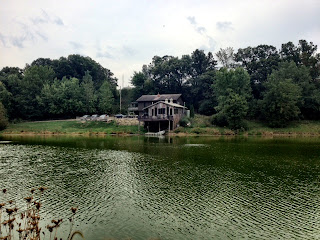 Without further ado, here is a rundown of our trip (though like Las Vegas, some things that happen at LM stay at LM!). 2/5 of our party got in to town first and, given that it's WI, they were instructed to meet the cabin in owner at his bar (dubbed "Cheese Daddy's") to follow him out the cabin. The less said about the cabin owner the better, but I don't think we'll soon forget him. I met my friend, Sharon, where our travel paths crossed so we could arrive at the cabin together and use my GPS and our two brains to navigate some detours and closed roads. Sharon and I made an easy dinner of taco salads at the cabin while the other three went to a cute, nearby town to dine at a Japanese restaurant.

Catherine, Tiffeny, and Amanda (aka Moroccan food blogger extrodinaire, MarocMama) met us at the cabin later that evening and we sipped some tea or wine while having a lovely catch-up session. We hoped the eerie, numerous stuffed critters hanging from the walls were not paying attention to us. Though many of us were tired, we talked later than we probably thought we would have, enjoying that easy kind of conversation that can delightful blossom among a group of new and old friends. We tucked away into the various beds around the cabin and Tiffeny and I happily shared her white noise app between our two beds.

The next morning, Cath was on breakfast duty and made a delicious egg, sweet potato, and blue corn chip dish. It was initially meant to be a frittata but we were not terribly surprised to discover the oven didn't work and the idea had to be reworked. Fortunately, Cath is an amazingly resourceful woman and the stovetop version turned out to be really, really tasty. Cath even brought photocopies of her recipe, hand-decorated to boot! I can't wait to make this dish at home.

We ventured out to the cute town nearby with the mission of obtaining a few random items and checking out the numerous shops, galleries, and cafes. Cath found special, yellow yarn for her daughter and Amanda found traditional pasties for her mom. I think we all would have enjoyed strolling and browsing more but we also wanted to enjoy the cabin (in spite of the taxidermy that none of us found to be terribly exciting). 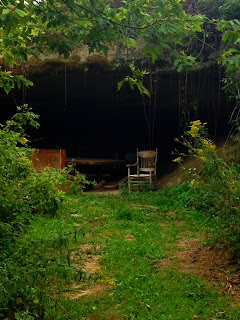 Back at "home," there was a bit of nap time and exploring time. The grounds were fairly large and we discovered another cabin (allegedly powered only by solar panels), an old bridge, a creepy cave with a very tiny waterfall sprinkling over it (and weird, random items inside), and a treehouse containing--what else--some sort of old fashioned adding machine. 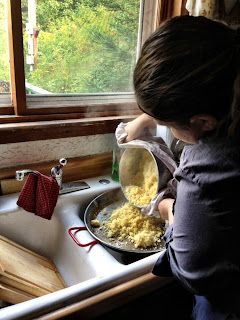 After exploring, Amanda began to prepare her triple-fluffed couscous. Yes, folks, no measly double fluffs for us! She even used her Moroccan couscousiere for the preparation, cooking the vegetables and making a broth in the lower part while steaming the couscous above. With no large serving platter in the cabin, the paellera I had brought along became a transcultural vessel in which to serve the dish. We enjoyed it Moroccan style--communally from the pan and Amanda assured us any spills on the table were just part of the tradition. It was really tasty fare and the couscous was indeed quite fluffy. 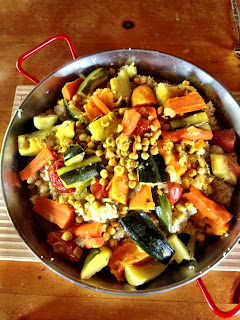 We enjoyed more conversation and tea after lunch. Given our full menu schedule and the nightly crop of bugs, Sharon wisely suggested a dessert of s'mores over the fire pit. We made do with some skewers found in the kitchen and made a small fire on the grill surface of the bbq pit for our marshmallows. I can't remember when I had my last s'more, but this was a lovely idea. More tea and wine followed, along with good conversation.

We also brought any items that we felt needed to find loving, new homes and had a swap. There were books, spices, tea, kitchen implements, decorative items, and more. It was interesting to hear the stories behind the items and what the new owner planned to do with her find. Personally, I scored bamboo steamers, BBQ sauce for Austin, a cookbook, and a novel. Now to find the time to enjoy them! 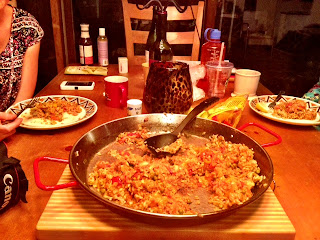 Much later in the day, Tiffeny and I prepared our dinner of veggie paella. We enjoyed it with some Spanish cava and toasted Lady Moon 2012 as a success. To top it off, Sharon prepared gorgeous crêpes and offered us a variety of sweet fillings. Magnifique! Once again, we talked until a bit later than we thought and tucked ourselves in.

The next morning, Tiffeny prepared a fantastic breakfast porridge made with red quinoa. We topped it with dried berries and nuts and poured on a bit of almond milk. It was hearty and tasty, especially on a gray and drizzly day. We wished we could spend the day lounging and relaxing but we had plans to move on. We loaded our cars with our things; new treasures and newly-minted memories and I don't think I was alone in pondering what Lady Moon 2013 might bring.