There is a nice farm-to-table style restaurant near our house that often has interesting specials and when a "Texas Burger Night" came up, I had to share it with Austin who was more than willing to give it a try. We wondered why they were closed for over a week during the holidays but found out they were taking a whirlwind tour of the Lone Star State to inform their menu--gotta love a place that takes their food research seriously!

Austin chose the Lockhart burger which included locally sourced prime beef, pepperjack cheese, pickles, onion rings and spicy Dr. Pepper BBQ sauce. Naturally he had to pair it with a Shiner. I could tell it was good because instead of talking, he nodded a lot, said "mmm," and licked his fingers. 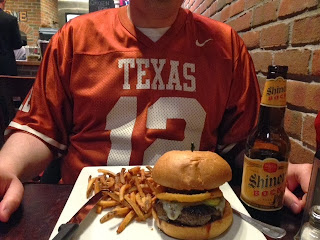 I opted for the autumn salad with mixed green, julienned green apple, candied pecans, and goat cheese with a side of balsamic dressing. It was very tasty and I'd like to recreate it at home. 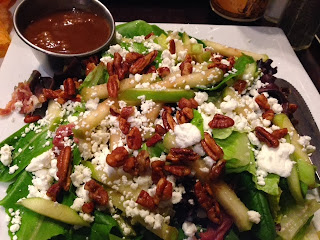 After our meal, we stopped by a liquor store for a wine (for me) and beer (for him) tasting and Austin scored a bottle of spiced rum that is distilled locally. Not a bad Wednesday night. 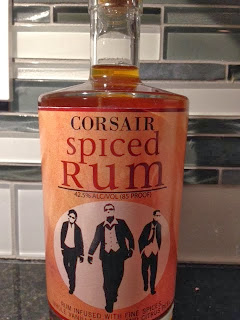 That all looks good! I'd like to try that burger sometime :).

We'd be happy to host you and take you out for burgers! :)