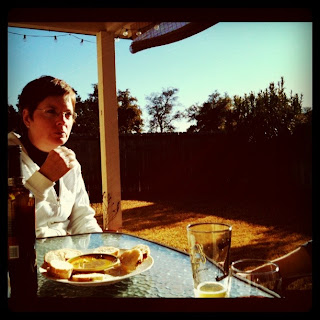 Paula was off yesterday, fully drenched in sunshine, BBQ, local wine, and general Texas goodness. After the Hill Country wine tastings and BBQ I posted about earlier, we played mini-golf at a perfectly kitschy course and then hit up Whole Foods for some grilling items. The above photo was a little pre-dinner baguette with olive oil and garlic along with locally crafted LundeRoy cider and some fantastic Sangiovese. Later, we turned on the patio lights and Austin grilled bleu cheese burgers and a cheddar-jalapeño salmon burger for me. I made a green salad with feta, pears, and toasted walnuts with a shallot vinaigrette and a side of lemon-shallot orzo. It was all delicious and we had to wait on the brownies with vanilla bean ice cream until the next day.

Due to flight delays, Paula was then subjected to the end of the Packer game (WOO HOO!) and the Steelers/Jets game with dinner at a new Mexican joint sandwiched in. On Monday, she saw Austin in action at the home office and took advantage of more sun-soaking on the patio before I dropped her off on my way to campus.

Thus unfolds another week in the LundeRoy household. Austin's birthday is on Friday and we may go to a wine tasting tomorrow night to kick off the celebration a little early. He is still pondering what we'll do to make merry but no doubt we'll have plenty of options to entertain.
Posted by Kelly at 11:37 AM