As I mentioned, I was at a conference for foreign language teachers in Denver starting last week. I have been to Denver several times before and was a bit wistful for a new city but fortunately, lots of exploring was still possible. 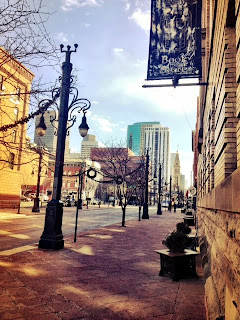 I met up with some colleagues from Wisconsin when I got into town Thursday night and, because on of them is half-Polish, we went out for Polish food. I wasn't entirely sure what to expect but it was definitely an enjoyable experience. I started with a borscht-like soup that was cut with sour cream so it was a gorgeous raspberry color. I had to try my friend's pickle soup which was probably my very favorite-- a recipe has been promised to me. I then had a cabbage roll stuffed with rice and smothered in a bright tomato sauce and we shared a fried dessert. It was wonderful to catch up, hear my friend speak fluent Polish, and try a new cuisine.

On Friday it was time to hit the conference. The first stop was the always overwhelming exhibitors' hall. This time my mission was to collect swag for my dissertation participants. The Japanese booths were fantastic; one had a sushi chef preparing food sample and even giving lessons on how to make rolls. I got lots of great materials there. I also got some French materials from the very generous Swiss embassy. After that, I attended some sessions. One of the best was given by the educational ambassador from Spain who happened to be based in Austin, TX. He discussed the multilingual schools in Spain and I was blown away to learn that one successful school near the Pyrenees teaches five subjects in five different languages. ¡Mágnifico!

Later that day, some colleagues and I gave a workshop on encouraging student writing. It went well and our room was packed with 150 audience members. We had the audience engage in some of the activities we had designed and I was so impressed with the creativity. For dinner, we went out for Native American fry bread tacos at a place that Guy Fieri (of Food Network fame) had featured. The food was outstanding and affordable. I am going to have to track down Guy's episode and watch it.

Saturday was another day of sessions and I also participated in a focus group about a textbook for a hybrid online/face-to-face class. It was interesting to see the kind of feedback publishers get from instructors and the instructors' beliefs about what their students would or would not do well with. I had to leave a little early to get to my panel discussion, presentation #2. The discussion session was also enjoyable to present and I liked that we had scheduled time to really talk with the audience members in smaller groups. It seemed as though we had barely scratched the surface when we came back to the larger group to end the session. After the panel, I had a meeting and gathering to attend and both offered wonderful appetizers and drinks so I didn't need to head out for dinner again.

Fortunately, there was time on Sunday to get one last meal in Denver. Four colleagues and I went to a place called Lola that I immediately fell for since it was decorated with my very favorite art media- stained glass, metal sculpture, and mosaics. Unfortunately, it was too dark to really photograph. I was to busy enjoying some table-side guacamole and my brunch entree, butternut squash-goat cheese enchiladas garnished with chile rojo and lime crema. Beyond wonderful and I'm already pondering recreating this at home.

Finally, with a little time to kill before heading to the airport, we stopped at one of my favorite bookstores in the world, Tattered Cover. One of the many reasons I love it- the shelves and shelves of non-English magazines. I scored Hola, my source for all Spanish gossip. 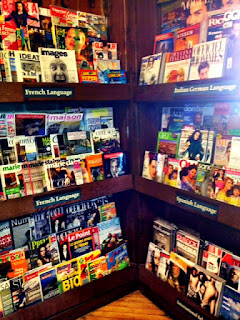 Then it was off to the airport and back to Texas, home, sweet home. I slept for about 10 hours last night with a cat on top of me and woke up with a cold. I am hoping to fight it off since I am so looking forward to hosting Thanksgiving for four of our friends.
Posted by Kelly at 9:08 AM

Phenomenal post! Sounds like a fantastic trip, other than the cold virus someone probably generously shared with you.

Sounds like it was a great trip. Sounds like great food; especially intrigued by the Polish food you had. Get well soon.

I'm curious about the pickle soup. What is it? Being a pickle lover, I'm intrigued and this is something I'm not familiar with.

The pickle soup was amazing- just Google "polish pickle soup" and you should find a baseline recipe. I'm waiting for my friend's and will share it when I get it. It was like eating a really tangy, dill-y baked potato soup. Very tasty.