We had a rather quiet weekend. I worked late on Friday and we ran a few errands on Saturday. While not a big fan of Valentine's Day, I did use it as an excuse to make a nice meal on Saturday: Crunchy shrimp with toasted couscous and ginger orange sauce. It's easy to make but does involve a fair amount of chopping and prep during which Stinky was near at hand (foot) in the event that I had something tasty he might need. 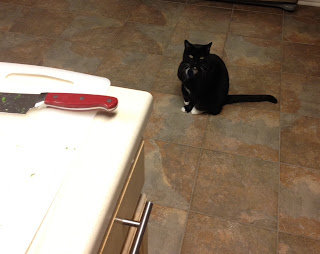 The end result was incredible. This recipe is from a 2005 issue of Cooking Light and I remember first reading about it while recovering from wisdom teeth surgery, lying on the couch and vowing this would be my first nice meal with fewer teeth in my head. We made it for Valentine's Day in early 2006 shortly after getting engaged so it has some sentimental value (dentally and personally speaking). The crunch of the panko and the notes of flavor from the ginger, orange, cilantro and scallions come together in sheer awesomeness. It just doesn't happen to photograph all that well on my phone.
Not pictured is the strawberry cheesecake I made from scratch. A long story short--Austin had a bad experience with a store-bought cheesecake and I felt the need to remedy the situation. 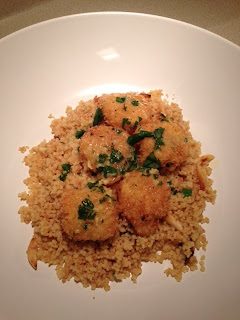 The other bit of excitement was a cold front that brought sleet and snow. I hadn't heard anything about it until this morning when it was too lately to save my (already ailing) basil. The tiny tomato plant seems to have survived as did the rosemary and a mum. The precipitation has since stopped but I had to document it for posterity. Yes, we occasionally see flurries in Texas and don't live in a year-round hot desert. It was kind of fun to see some snow on a lazy Sunday afternoon and we're grateful our morning commute tomorrow is a few yards from the shower to our desks. 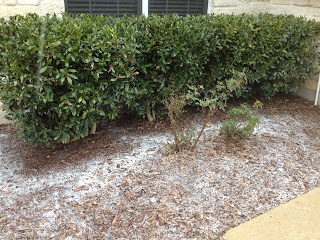