Back to Normal (Almost) 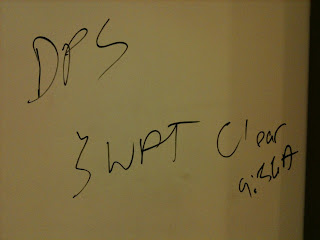 Everything was normal back on campus, other than the "where were you when" conversations. The library was open (minus the floor in question) and students were sitting out on the lawn, enjoying the nice weather.

I went to class this afternoon in one of the buildings near the library (where I would have been Tuesday) and the only eerie sign that anything had happened was the SWAT team's scrawlings on all the doors. Some said "locked" others said "clear" and some I couldn't decipher.

So, in the spirit of the motto of my good ol' home state, "Forward."
Posted by Kelly at 8:00 PM No comments: 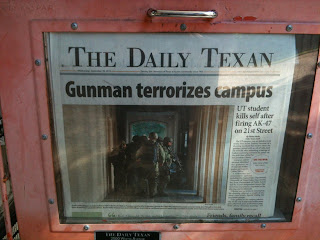 I love all the names people have suggested for our little moonshine operation, thank you all! I'm thinking we'll need one name for our "business" and a different name for the product (Austin keeps hinting that this is the gateway into brewing our own beer and making wine). Keep the ideas coming if anything else occurs to you.
Posted by Kelly at 7:28 PM No comments:

We picked up supplies today to make another five gallon jug of cider as well as a smaller glass gallon jug. Hopefully this stuff is really, really good.

We like the name suggestion of AK-47 though still haven't decided. I was thinking something like LundeRoy Libations. We're open to your continued ideas and once we have a name, the fun part of designing the label will be next.
Posted by Kelly at 5:50 PM 2 comments:

Welcome to Fermentation Watch 2010. Here's the air lock, bubbling away. That's vodka in it since water would easily get contaminated with bacteria.

So, dear reader, can you come up with a catchy name for our labels (assuming this stuff isn't disgusting and we actually bottle it)? We're taking suggestions.
Posted by Austin at 7:56 PM 6 comments:

MYOB- make your own booze, that is. Austin found a thread about making your own hard cider and we couldn't believe how easy it appeared. After further research, he found a local brewing store where we were able to pick up all the necessary gear with the guidance of very helpful staff. Add in the five gallons of apple juice, and the budget is still well under $100. We poured the juice with some sugar into the sterilized jug (aka "car boy") and added yeast at the end. Then you've got five gallons of cider mixture that will ferment into hard cider in the next month. Five gallons. I think it will be our Halloween potion; feel free to stop by for a trick and a treat (and I'm especially looking at Bad Z here). Cannot wait to taste it!
Posted by Kelly at 6:01 PM No comments: 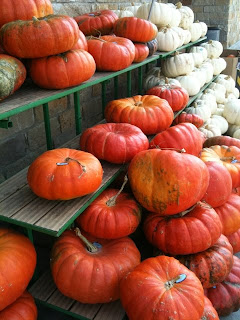 Many people complain that upcoming holiday goods come out earlier and earlier every year. My favorite season happens to be fall and I always have to restrain myself from buying lots and lots of pumpkins. Check these guys out, "fairytale pumpkins" with a few ghost pumpkins in the edge of the frame. Austin recommends October 1st as a reasonable time to procure and display autumn decorations. I get excited, thinking how close that is and then- the trick to my treat- I remember I told my advisor I'd get her the first draft of my dissertation proposal by then. October 1 now seems to be bearing down on me at light speed.

Yep, the proposal is the icing on the cake of taking and teaching a full load of courses. The proposal is the first three chapters. Until very recently, I haven't been able to take it seriously. What I'm writing is the start of my actual dissertation? I haven't even done the research yet! I've finally begun to accept that this is The Real Thing and I need to treat it accordingly so unfortunately this makes for boring blogging material. But yeah, that's what I'm up to at the moment.
Posted by Kelly at 3:45 PM No comments:

It's a lazy Sunday here. We're coming up on the usual errands and I've got lots of studying/teaching prep that I want to get through. Just the usual. It's been a low key weekend all around except for my outing downtown last night for a friend's birthday. Austin has unwound with some gaming and today will likely be watching football which he alleges Stinky enjoys. Austin is in a fantasy league (go, Provo Mormonators!) so it is even more fun for him to watch the game as he cheers on his assorted players. Catching some of the Packer game will be more than enough for me. Quite times with the LundeRoys but that's just fine with us.
Posted by Kelly at 9:01 AM No comments: 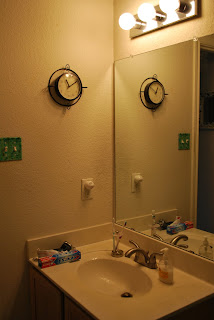 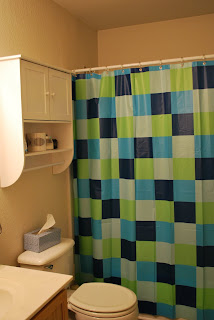 And some after pics. New shower curtain and light fixture (not the one we liked best but an improvement). 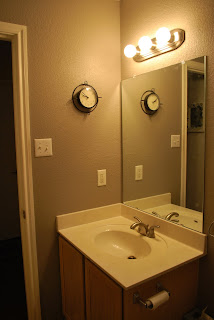 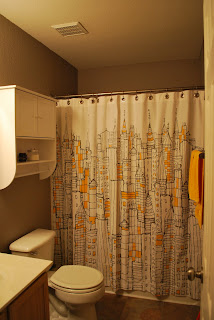 The photos show the paint a little lighter than it is but you get the idea. We are really happy with the outcome and I think we're done painting for awhile.
Posted by Kelly at 8:55 AM No comments: 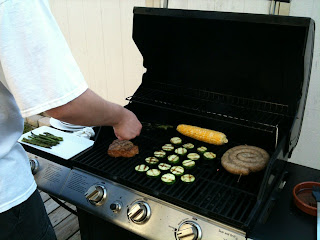 This is Austin, the grillmaster, preparing all sorts of foods. My friend came over and each of us had a different meat- bratwurst for her (the coiled sausage you see), New York strip for Austin, and tuna steak for me. We also grilled up some veggies and had a fresh green salad. Today was warm and sunny, hitting the lower 90s which is now warm to me when the humidity remains low.

Yesterday, we painted the bathroom (pics when it's fully reassembled) and did some much needed yard work since the weather is finally making that task more enjoyable. Austin also fixed our mower and the $30 Craigslist wonder keeps on keepin' on.

Friday evening, Austin headed to his favorite electronics shopping destination (I can't call it a store because it's bigger than Best Buy and has a cafe in the middle) while I stayed home and worked on some materials for the conference I'll be attending in November (translation: I made puppets made from paper, crayons, and tongue depressors pilfered from my place of employ). It was finally cool enough to open all the windows for the first time this season so I enjoyed that feeling and lit several of the autumn-scented candles we made once upon a time to pretend the crispness of fall was coming sooner than it really is.

All in all, our weekend has been that satisfying balance of productive and relaxing. Tomorrow I'll do my usual prep for my long day of classes on Tuesday and I think Austin has plans to work on a hard drive and another techie project related to our entertainment center. All in all, a very good weekend at the LundeRoy Lodge.
Posted by Kelly at 7:15 PM No comments: