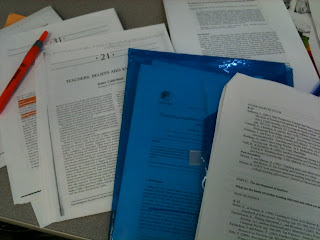 That's a photo of the flotsam and jetsam of my midterm writing process (ok, part of it). I just submitted my last paper (of two and a lengthy presentation) and now it's back to my regularly scheduled classes-teaching-proposing. There has been a lot going on with my dissertation committee and getting it organized but that finally seems to be heading in a positive direction.

Austin has managed to refrain from adding to our 12 gallons of cider so far and instead installed a separate water filter spout on the kitchen sink. He actually drilled through the sink with a frightening cone-shaped drill bit but he doesn't seem nearly as nervous about creating holes in things as I would be.

We put up some orange lights and set a few pumpkins out but have been disappointed that Target's Halloween decorations were picked over quickly. We don't want the huge spread but thought a few more things might be fun. Austin's greatest homeowner dream is to install color changing LED bulbs so he can leave them up permanently and program the color of his choosing depending on the season. He is undoubtedly his father's son (and uncle's nephew).
Posted by Kelly at 1:35 PM

I hope you make it through midterms alive! That is a fantastic, yet slightly lazy idea, from Austin:)