I'm a light sleeper and I woke up around 1a.m. this morning to hear the throaty howls of a cat in trouble, namely our furry roommate Stinky. I got Austin up and we ran to the back patio door but slowly peeked out, given the history of a neighborhood skunk. We couldn't see much but Austin managed to get Stinky to him and nab the cat. Once we got him inside, we discovered a bloody gash under his left eye, a random claw near his ear, and some very minor scratches on his belly. His eyes were huge and he was scared but instantly was all purrs while we examined him.

We kept him in overnight and the cut under his eye was almost invisible this morning. He's still in spooky mode and was doing a lot of sniffing at the end of the patio where we found him. There are two other neighbor cats that live outside so we're pretty sure that's who the impostor was. Of course it's entirely possible that Stinky hits up their yards for a fight from time to time, who knows, but last night the rumble was on our turf. It's one of the perils of having an outside cat and based on the ear notches and scars, Stinky's past life was pretty rough, but it was sad to see it happen. At least I woke up and we got him in just in case it was going to get uglier.

So here's yet another cat picture, I know that's why you read this blog, to see my cat in various poses and levels of cuteness. 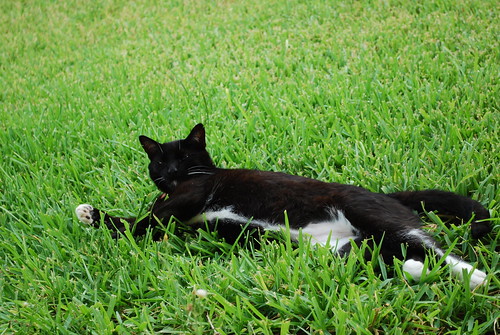 ETA: Found several clumps of black fur and another claw at the end of the patio.
Posted by Kelly at 9:01 AM