The trip north was uneventful and smooth. We decided to push hard the first day so we could arrive with time to see people on the second day. For dinner, we found an outstanding little Mexican place in Topeka that I'll have to write an online review about, it was that good. Then we cruised on until we were just north of Kansas City and crashed.

The next morning, we were clear of the KC rush hour and pushed north. At this point, we were getting antsy. We stopped for lunch in northern IA and were disappointed that the Culver's there did not serve cheese curds; apparently we were still too far from WI. We got to MN and were welcomed with cool weather and rain, a really refreshing change from the TX summer weather.

Our first stop was Edina to see Austin's grandma in the hospital. We had a nice visit and also ran into Austin's uncle Chris so we were able to catch up with him too. Then we were off again to south Minneapolis and arrived at Austin's parents' house. Austin's brother and fiancee were there too and we were so happy to meet Carrie before the upcoming November wedding. Carrie made us veggie lasagna for dinner and we had a cozy evening sipping wine and talking.

Friday it was time to get to business- we met up with my parents and a friend (shout out to Bad Z!) for an early lunch and then headed to the dealership. It took awhile but soon our new little ride rolled up to the front door and we were off again to visit my aunt Leslie.

We went to Austin's sister's for dinner and my brother-in-law made some amazing homemade pizza. We had a nice visit with nephew Conner. Unfortunately, I wasn't feeling so great and spent part of the time lying down. Then it was home and to bed for the return road trip the next day.

Liz made us a big breakfast to send us off and we said goodbye to Carrie and Nick (Mike was out of town). We were off again and, while the trip itself wasn't appealing, the new car was very enjoyable to drive and get to know.

All I can say about the return trip is that it was long. And boring. And in summary- Iowa, you win for having the most road "construction" (lane closures and cones but no visible work) and the nicest rest stops. Wireless internet! Beautiful landscaping and historic tidbits! Lovely. MissouriKansasOklahoma, ummm, well, sorry but I won't miss you.

And now we're home and Stinky is getting caught up on his backlog of love and pets and butt scratches and I've been jarred into the reality that fall semester starts tomorrow. Ack. Scramble. Rush. But more on that later, for now, here are some random photos from the trip.

Our views most of the time: 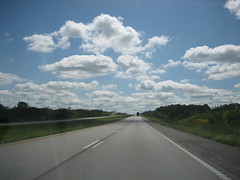 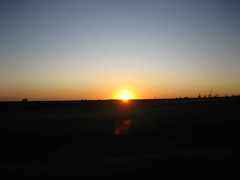 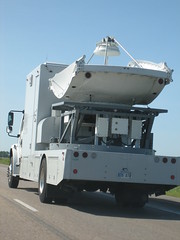 Austin's favorite billboard (mine was "fried pies" but we couldn't get a good shot of it): 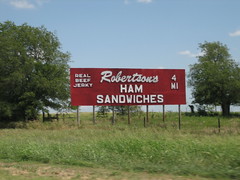 Just because I love this shot of the skyline: 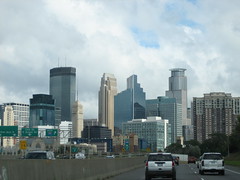